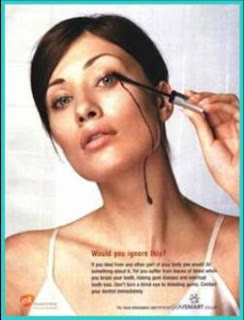 I'd like to share a tale that might help save a lot of grief in the future. Its about periodontal (gum) disease. One of my personal nightmares (like the one about falling) is my teeth falling out - and I don't think I'm alone.

A guy came to see me for the first time recently. When we sat down to talk he explained that his gums had been bleeding for years, he had a bad taste in his mouth and he wasn't so sure about his breath. He'd been going to his last dentist regularly every six months. At his recent last visit he was told everything was fine.
Lets just stop there:
So , we moved on to the examination, did all the usual stuff that dentists do, including the thing I want to highlight: the BPE.
h3The BPE Advantage BPE stands for Basic Periodontal Examination. Its a quick screen, a sorting of the wheat from the chaff. The dentist takes a small measuring device, rather like a pointy stick with a ball on the end. By gently (honest) poking the gums we can very quickly see what state a clients gums are in and if gum disease is present. Its not new - its been around since I was at dental school in the 80's at least, and it should be carried out on every adult patient (with teeth!) at least once a year. To be safe I just do it every time. Scores go from zero (=perfect) up through 1,2,3,4, to "star" (=seriously bad news).
Needless to say, this guy had problems. He had a couple of areas where there were stars and the rest were threes. A scanning X ray quickly showed that more than 50% of the bone that once attached his teeth to his head had gone.
I had to tell him that he was likely to lose some of his teeth in the medium to long term, and we have started a program of gum care to try and rescue the rest. After my hygiene team have stabilised his disease they will be seeing him for checks and catch up treatment every three months, possibly for life.
So whats the moral in the tale?
My advice to you?
The picture attached neatly sums it up - a great ad used a while ago by a mouthrinse manufacturer.
PRINT